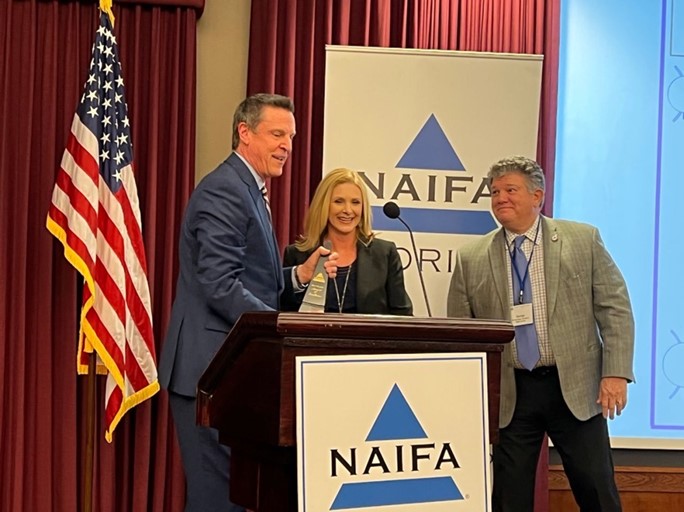 NAIFA-Florida CEO Tom Ashley announced that Tim Meenan was presented with one of the organization’s highest awards, the Herb Morgan Award of Excellence.  Named after former State Representative Herb Morgan, who represented Tallahassee in the Florida Legislature and later went on to be NAIFA-Florida’s CEO and lobbyist, it is given annually to a member of NAIFA-Florida who excels in promoting the interests of the association including advocacy, membership, leadership and PAC contributions.  “Tim Meenan has served NAIFA since 2004, and we wanted to recognize his many contributions to our life, health and property insurance agent members,” said Ashley.  NAIFA-Florida also announced that the award is being renamed the “Morgan-Meenan Award of Excellence.”   “I am humbled beyond belief, having known and worked with Herb Morgan early in my career,” said Tim Meenan.   “Upon the passing of Herb Morgan, the front page of the Tallahassee Democrat called him “Honest Herb Morgan” in two inch high letters, and he has left a lasting legacy,” said Meenan.   The Partners and Attorneys of Meenan PA congratulate Tim and look forward to continuing to work with NAIFA-Florida in the future.